Friday, January 6, 6:45 pm,  Bethlehem Public Library, 451 Delaware Avenue, Delmar, NY.  (Please note the venue for this event has  changed.)  The James Connolly Forum presents a talk by Scott Ritter and Dan Kovalik on the Ukraine War. Scott Ritter is an external Contributor to Energy Intelligence. He is a former US Marine Corps Intelligence Officer whose service over a 20-plus-year career included tours of duty in the former Soviet Union implementing arms control agreements, serving on the staff of US Gen. Norman Schwarzkopf during the Gulf War and later as a Chief Weapons Inspector with the UN in Iraq from 1991-98. His latest book is Disarmament in the Time of Perestroika. Dan Kovalik graduated from Columbia Law School in 1993, and currently teaches International Human Rights at the University of Pittsburgh School of Law. He served as in-house counsel for the United Steelworkers for 26 years. He is the author of many books including The Plot to Overthrow Venezuela, How the US Is Orchestrating a Coup for Oil, which includes a Foreword by Oliver Stone.. He just returned from a trip to Donetsk. Co-sponsored by UNAC and Bethlehem Neighbors for Peace. More Information: 518-407-3582 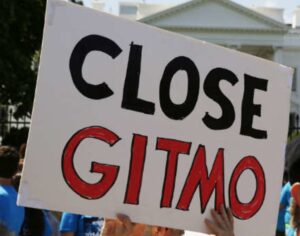 Monday, January 9, 4:00 – 5:00 pm, Close Guantanamo, Free the Innocent. BNP Vigil, at the Four Corners, intersection of Kenwood and Delaware Aves., Delmar. The 21st anniversary (January 11, 2023) of the first detainee/prisoner arriving at the Guantanamo Naval Base prison is little more than a month away. 35 men — 20 of whom have been cleared for release — remain locked up there. Bring your sign or use one of ours. Stay for a few minutes or an hour. We are calling for the closure of the prison and the release of the innocent men we continue to isolate there. We must not forget the men and the injustice they continue to suffer at the hands of our government. Let’s stand together. 518-466-1192 for further information. Sign Suggestions: Free the Innocent Guantanamo Prisoners, End 21 years of Guantanamo Cruelty, Guantanamo Prison = 21 years of American Sh 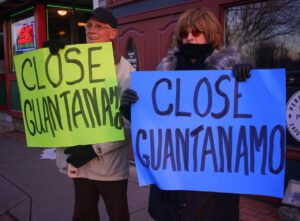 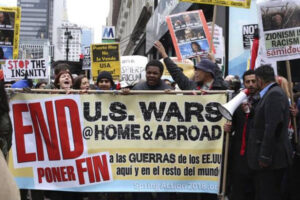 Monday, January 16, 4:00 – 5:00 pm, Four Corners, intersection of Kenwood and Delaware Aves. in Delmar, NY. Stop US/NATO Wars and Sanctions Vigil United National Antiwar Coalition has called for STOP U.S. Wars: MLK Week of Actions, Jan 13–22.
It is extremely important that we build a strong, unified antiwar movement that can break through the media propaganda and censorship and end the US military aggression around the world. Today working people face escalating costs of food and energy, recession, growing insecurity and attacks on efforts to unionize. The continuing wars and military provocations have brought us to the brink of nuclear war.  Possible signs: Ceasefire Now!, Negotiation NOT Escalation, Stop Washington’s war moves toward Russia and China!, Stop endless wars: Iraq, Syria, Somalia, Palestine…. everywhere. Co-sponsored by Women Against War.  Stay for a few minutes or an hour. Information: 518-466-1192.

Peace Vigil each Monday, 5 – 6 PM at the Four Corners, intersection of Kenwood and Delaware Aves. in Delmar.

Ready to find out more?